Varkala has a moderate climate, with heavy rains during June-August due to the southwest monsoon. Winter starts from December and continues till February. In summer, the temperature rises to a maximum of 35°C and 25°C in the winters. Annual average rainfall is 310cm.

Food :
Staple food of Varkala and common to Kerala, viz. Rice and fish curry. Nendranga Chips is famous all over the world. Nendranga is a Banana variety of Kerala. This apart it is usually 'Dosa' or 'Idly', made from ricepaste, with coconut chutney for breakfast. 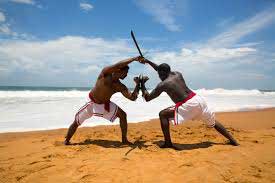 Despite invasion by many dynasties, the Keralite culture is intact which can be observed in the temples of Kerala. Same is the case in Varkala.

Similarly in preserving their traditional art, the Keralites were firm. Varkala has centers for Kalaripayattu, one of the oldest living tradition of martial training and physical culture in the world, which also strengthens mind through physical exercises.