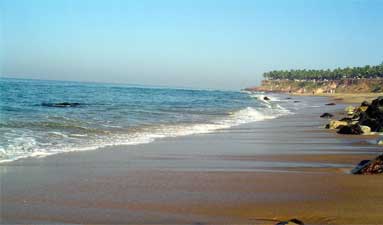 There are several myths abound on the birth of Varkala. A legend goes like this - when a group of pilgrims approached Saint Narada and told him that they had sinned, Narada threw his valkalam ( a loin cloth made from the bark of a tree) and it landed at this scenic village and hence, the place came to be known as 'Varkala'.

Narada directed his devotees to offer prayers at the beach where the valkalam landed. This place then came to be known as 'Papanasam' meaning redemption from sins.

And it is also believed that a Pandyan King in his dreams was instructed by Lord Brahma to build a temple at this very place to redeem him of his sins. This temple is this temple at Varkala, which is known by the name Janardhana Temple. This temple is almost 2000 years old. It is owing to this temple that Varkala is also known as the Southern Varanasi or Thenkasi. The place was also referred to as Udaya Marathandapuram, to commemorate the contributions of the then Travancore king Udaya Marthanda Varma.

Varkala also holds the place in the ancient trade history, especially during the Sangha Dynasty. This place was known by the name of Balita in the ancient Greek manuscript called The Periplus of the Erythraean Sea. It was an ancient port for foreign traders as per the historical documents.

Another interesting factor of Varkala is the 924 feet long tunnel which took almost 14 years to be completed. This was built in the 19th century and was then used as a route for ferry boats between Trivandrum and Kollam. Popularly this tunnel is known as the Varkala Thuruthu.